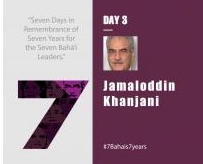 Today is the day the world will honor Jamaloddin Khanjani, who has been wrongfully imprisoned since 2008 solely for his religious beliefs, as part of the global “Seven Days in Remembrance of Seven Years in Prison for the Seven Baha’i Leaders” campaign.

Mr. Khanjani, 81, is a once-successful factory owner who lost his business after the 1979 Islamic revolution because of his belief in the Baha’i Faith – and who then spent most of the 1980s on the run under the threat of death from Iranian authorities.

Born 27 July 1933 in the city of Sangsar, Mr. Khanjani grew up on a dairy farm in Semnan province and never obtained more than a high school education. Yet his dynamic personality soon led to a successful career in industrial production – and as a Baha’i leader.

Before his current incarceration, Mr. Khanjani was arrested and jailed by the Iranian government at least three times. He was arrested again at his home in Tehran on 14 May 2008 in early morning raids that seized five of his colleagues; another had been arrested in March 2009.

First sent to Evin prison, after a wholly unfair trial in 2010, he and the other four male leaders were sent to Gohardasht Prison, which is renowned for its brutal conditions.

In March 2011, Mrs. Ashraf Khanjani passed away – and yet Mr. Khanjani was denied leave to attend her last days or her funeral. The couple had been married for more than 50 years. Together, they had four children.

Other members of Mr. Khanjani’s family have also suffered severe persecution purely because of their religious beliefs. His son, nephew, granddaughter, grandson, and grandnephew have all spent time in prison; the last two are still incarcerated. Many of the family shops and properties also, have been sealed, shut down or subjected to various attacks.

In August 2014, for example, Mr. Khanjani’s son, Aladdin, was arrested along with four other Baha’s in a raid on an optical shop in Semnan where he worked. It was the second time, at least, that Aladdin, known as Niki, was arrested. In 2011, the apartment of Mr. Khanjani’s brother, Nejat, was attacked by twice in one month by unknown individuals who threw firebombs at the windows.

“We believe the entire series of arrests, imprisonments and attacks on Mr. Khanjani’s family is part of a concerted effort to put pressure on him to ‘confess’ to supposed and, of course, non-existent ‘crimes,’” said Ms. Ala’i.

In his professional career, Mr. Khanjani has worked as an employee of the Pepsi Cola Company in Iran, where he was a purchasing supervisor. He left Pepsi Cola and started a charcoal production business. Later he established the first automated brick factory in Iran, ultimately employing several hundred people.

In the early 1980s, he was forced to shut down that factory and abandon it, putting most of his employees out of work, because of the persecution he faced as a Baha’i. The factory was later confiscated by the government.

In his career of voluntary service to his religious community, Mr. Khanjani was at various points a member of the local Spiritual Assembly of Isfahan and a regional level Auxiliary Board member, an appointed position which serves principally to inspire, encourage, and promote learning among Baha’is. In the early 1980s, he was elected to the national governing council of the Baha’is of Iran – a group known as the “National Spiritual Assembly.”

In 1980, several years prior to his election, all nine members of the Assembly were abducted and never heard from again. Their successors were arrested and executed in 1981. Mr. Khanjani was thus a member of the so-called “third” National Spiritual Assembly, which was banned in 1983 and saw four of its nine members executed by the government in 1984.

In the 1990s, Mr. Khanjani was able to establish a mechanized farm on properties owned by his family. Nevertheless, authorities placed many restrictions on him, making it difficult to do business. These restrictions extended to his children and relatives, and included refusing loans, closing their places of business, limiting their business dealings, and banning travel outside the country.

Mr. Khanjani and his six colleagues formed the entire membership of the now-disbanded ad hoc group known as the “Yaran” or “Friends,” tending to the spiritual and social needs of the Iranian Baha’i community in the absence of formally elected Baha’i leadership.

The names of the others are Fariba Kamalabadi, Afif Naeimi, Saeid Rezaie, Mahvash Sabet, Behrouz Tavakkoli, and Vahid Tizfahm. Ms. Sabet was arrested on 5 March 2008; the others were arrested on 14 May 2008.

In 2010, the seven were tried and wrongfully convicted on charges of “espionage” and “spreading propaganda against the regime,” among other false accusations. They were sentenced to 20 years in prison, the longest terms of any current prisoners of conscience in Iran.

The campaign to remember them will run until 21 May 2015. Events are being planned around the world by Baha’i communities and others to call attention to the plight of the seven, along with the wrongful imprisonment of 110 other Baha’is in Iran – as well as other prisoners of conscience there.

Each day, a different member will be commemorated. Tomorrow, 17 May, the campaign will focus on the situation of Afif Naeimi.

“Our hope is that people around the world will organize spirited actions, reach out to governments and society at large, and involve friends and family in an effort to draw attention to the situation of each member of the seven on the day designated to him or her,” said Bani Dugal, the principal representative of the Baha’i International Community to the United Nations.

Facebook event pages in English (https://www.facebook.com/events/1638889016341780/) and in Perisan have been set up as rallying points and a hashtag has been designated: #7Bahais7years. For more information, go to: www.bic.org/7Bahais7years.

(NOTE: I did not write this post. I copied it directly from the Baha’i International Community – United Nations Office website: https://www.bic.org/news/Honoring-Jamaloddin-Khanjani-Day-Three-7Bahais7years-Campaign. Please pass this information onto your network so these types of injustice can be stopped.)

My life changes in the blink of the eye. So I need to be flexible, adaptable, and open to new adventures at a moment's notice! Throughout all of my hardships, I'm always blessed with what I need, which usually includes angels that walk the earth wearing jeans & t-shirts. I invite you to browse my blogs to follow along as I navigate the twists and turns of life as a human on this earth.